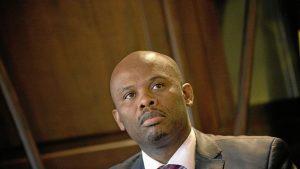 Major General Shadrack Sibiya has been suspended again. When he argued that his first suspension was unclear, that was withdrawn and another issued.
Image: Mail and Guardian.

Gauteng’s Hawks boss, Major General Shadrack Sibiya has been suspended again, the Mail and Guardian reported. This follows an earlier suspension, which was withdrawn by the Hawks earlier in the week after it had been taken to court on Tuesday by Sibiya.

Drama seems to be linked to the happenings of 2010’and 2011 when the Hawks Bosses are alleged to have participated in the illegal rendition of Zimbabweans to face the various crimes their government was accusing them of. Late last year, the Hawks national leader, Anwa Dramat was also suspended pending investigations for the same offences. Recently, another Hawks Boss, Leslie Maluleke was also served with a suspension on the same charges of illegal deportation of Zimbabweans in 2010 and 2011.

When he was served with his suspension, Sibiya argued that the suspension was not clear on what he was being charged with and, consequently, he could therefore not defend himself. He was so convinced that he was right about this line of argument that he advised his legal adviser, Victor Nkwashu to put the case before a labour court and demand that the suspension be thrown out. However, the Hawks withdrew the suspension a day before it could be heard, resulting in that Judge David Gush had to strike the case from the roll because, as Hawks Legal Adviser, Naomi Manaka aptly put it, since the suspension notice had been withdrawn, the request for details of his suspension was moot. This meant that Major General Sibiya could resume his normal duties on Monday.

However, this was not to be because another suspension notice was issued to Major General Sibiya on Monday. This new notice, according to the Hawks, had all the reasons for the suspension which Sibiya had pointed out had been missing fro the first notice. In response to the second suspension notice, Victor Nkwashu argued that the rush with which the suspensions were being served was surprising given that the investigations were conducted more than four years ago. Says Nkwashu, “We do not understand the rush, when the original investigation by the Independent Police Investigative Directorate (IPID) was carried out 4 years ago. Do they have new information.” He further added that in the investigation, the IPID had not recommended the suspension of Sibiya and he wondered if new evidence had come to light. The matter was still being investigated by the National Prosecuting Authority.