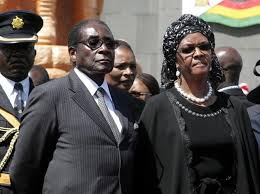 Grace Mugabe, wife of the current Zimbabwean president, Robert Mugabe, has accepted a unanimous nomination to become secretary of the Zanu-PF Women’s League.

The nomination was unanimous, with her recommendation coming from thousands of women at the first lady’s birthday celebration in Moshonaland Central province. This is Mrs Mugabe’s first attempt to engage in the politics of Zimbabwe. She will officially take over as the new secretary of the Women’s League at the party’s congress next month.

The move has triggered a sense of anxiety among many powerful Zimbabwean politicians, as it is feared that the current president, Robert Mugabe, may be attempting to groom his wife for a future as president, as he is rumored to be retiring in the near future. Many believe that president Mugabe has orchestrated this move in order to protect his family’s business interests when he decides to retire from a life of politics.

The induction into the Women’s League makes Grace Mugabe a member of the Zanu-PF politburo at the congress in December, which makes her an eligible candidate for the role of president, with the backing of her husband. The politburo is established in order to debate who will be named the successor of the current president at the end of his term.

The induction of the first lady into politics could be considered an attempt to halt factionalism from occurring within Zanu-PF and to prevent the current vice-president, Joice Mujuru, and justice minister, Emmerson Mnangagwa, from attempting to take a shot at the presidency themselves, as has been strongly rumored to be occurring.

Grace Mugabe was described at her birthday celebration of being deserving of a political career and a greater role in the direction of the country. Supporters of this explained how she had not deserted her husband despite criticism from the West and the paparazzi, who had both allegedly attacked the Mugabe family.