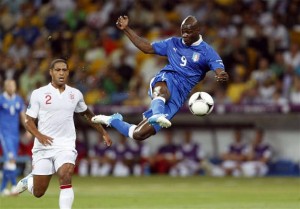 The Azzuri have managed to stay in contention of heading their group as they narrowly beat fellow Europeans, England 2-1 in a hotly contested match on Saturday.

England had a chance to take the lead as early as the fourth minute when Sterling unleashed a twenty five meter drive towards the Italian goal and watched in agony as his effect hit the side netting. Another England chance came in the 24th minute when Wellbeck, after pulling a few defenders to the right and forward, he cut the ball back towards Sturridge, who was well positioned to slot the ball home but a last gasp effort from an Italian defender took the ball out for a corner kick. The resulting corner kick was missed by every player with the exception of Rooney who could just not pack a good shot.

The goal finally came in the thirty fifth minute but not for England. Ta short corner was taken and worked inwards and, via a Pirlo dummy, was worked towards Marchisio who unleashed a well grounded thunderbolt that somehow managed to miss several England and Italian legs as well as the diving goalkeeper’s hand on its way into the English goal. While it was a brilliant shot and should not be taken away from the Italian player, it showed that the England defence zoned out for some time giving the Italians room to manouvre.

England were, however not daunted by the task at hand and were rewarded two minutes later by a goal from Sturridge after a wonderful three man exchange that involved Sterling and Rooney in a fast paced counter attack. The celebrations on the bench were so much that it appears to have caused an injury to the English Medic as he appears to have broken his leg. He was carried to hospital.

Italy ended the half in complete control and England did well to ward off the attack. Just into the injury time of the first half, Balotelli beat the off side trap mounted by the English and sent a searching lob towards the opposition goal and would have earned his team a lead going into the break were it not for Jagielka who headed off the line. They still went ahead and mounted another attack. This time it was through Marchisio who chipped a pass to Candreva who had acres of space on the left side. He cut back inside and released a masterpiece that rebounded of the left upright.

In the second half, as early as the 49th minute, Sturridge cut past Daniele De Rossi on the right and cracked a shot which the goalkeeper parried around the goal. Literally the next minute, the Azzuri sent one more past the England goal. A cross from the right found Balotelli unmarked on the far post to nod home his country into the lead and pot one step into the group of the last sixteen.

This means that England have to win their next group game which will be against Uruguay in São Paulo otherwise it will be an early exit.