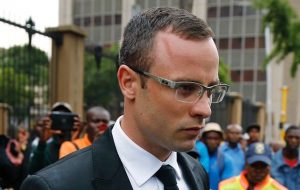 Oscar leaving court after his trial in 2014.
Image: Timeslive.

It appears that Oscar Pistorious will soon be heading back to jail to serve a longer sentence following the decision of the Supreme Court of Appeals (SCA) on Thursday to upgrade his conviction from culpable homicide to murder.

Pistorious was convicted of culpable homicide last year for shooting his girlfriend Reeva Steenkamp to death on Valentine’s day in 2013. He claimed that he mistook her for an intruder. In November 2014, judge Thokozile Masipa sentenced him to five years in prison. This elicited an an outcry from the public and state prosecutors, who felt that the sentence was too light. The prosecutors appealed against the conviction for culpable homicide, saying it should be upgraded to murder. A year later, after the hearing, when Pistorious was already out on parole, the SCA found him guilty of murder, which carries a minimum sentence of 15 years. This means that his sentence could be extended by up to ten years.

The SCA found that in reaching the conviction of culpable homicide, Judge Masipa had made errors of law and did not take into account the ballistic evidence, which the judges considered to be crucial.

The Steenkamp family expressed relief after the verdict and said they would now be able to get on with their lives.

However, there are speculations that due to his physical disability, Pistorious could spend a total of only three years in prison.

The case is expected to go back to the Pretoria High court after Christmas for re-sentencing. In the meantime, Pistorious remains under house arrest at his uncle’s mansion in Waterfkloof.