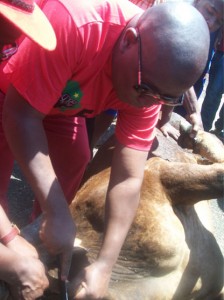 Commander in Chief of EFF, Julius Malema slaughters cow ahead of the national launch of his organisation. – image – Ntokozo Sindane

Members of the press watched on as the Commander in Chief of the Economic Freedom Fighters, Julius Malema stuck to African tradition of slaughtering a cow ahead of the launch festivities. Malema turned out to be a reliable authority in the difficult task of slaughtering a full grown bull. He gave instructions and confidently guided his fighters throughout the process.

The media, members of the EFF Central Command Team and some community members witnessed the occasion at Wonderkop, known as Koppie. The Koppie holds an unforgettable place on the landscape of protest marches in South Africa. This is where the police killed striking miners last year.

The slaughter of the cow was symbolic and meant to appease the spirits of those who died there. The EFF will slaughter eight cows at this location today. However, the first one was killed by the Commander in Chief with a steady stroke of a sharp blade straight to the head. In the nearby veld, contractors could be seen setting up for the launch tomorrow.

There was no disruption by other political parties as was expected. There was a minor incident which was handled efficiently and without injury by the security personnel that was present at the Koppie. Oupa Pokojane was caught collecting the registration numbers of vehicles carrying the EFF delegation. He was apprehended in the parking lot and released to the custody of the police responding to enquiries. No political parties were implicated in the incident.

The police confirmed that they will maintain a heavy presence in the area throughout the weekend. The Public News Hub spoke to some of the residents in the area. Mamsy Mofokeng said: “We do not have a problem with Julius Malema and his people. They are fighting for us because the government does not care about the people of Marikana.” The EFF national launch will commence on Sunday morning.