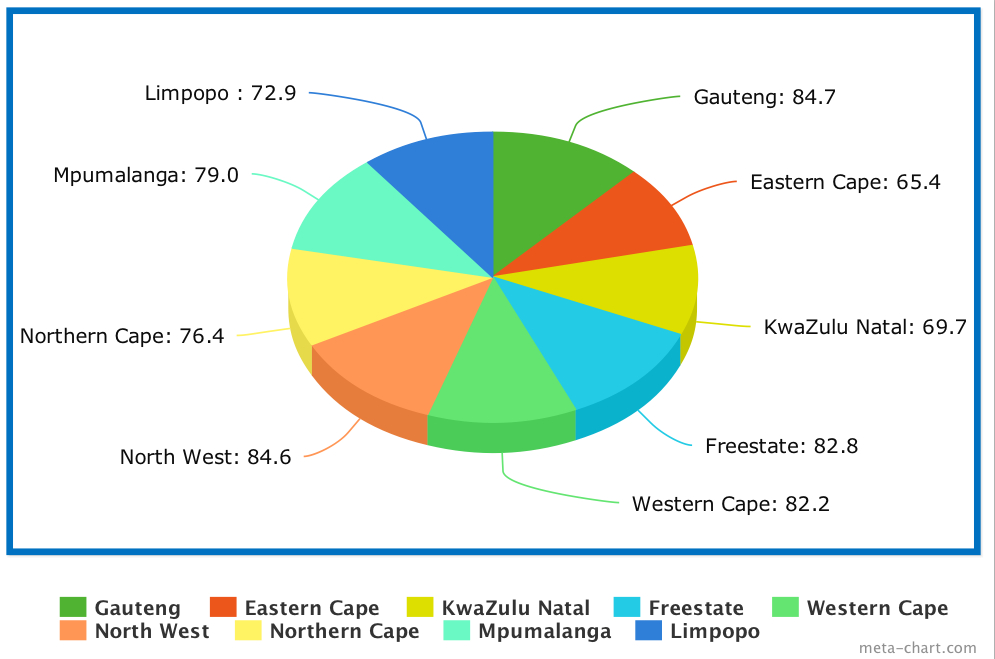 A pie chart showing the performance of each province in the 2014 Matric Examinations.

According to the Department of Basic Education, its analysis reveals that there is a decline in the pass rate of matriculants this year. In addition, the Department also showed that while Gauteng was the top performing province, Eastern Cape on the other end of the spectrum produced the worst results for 2014. Another trend that was shown by the results is that the Western Cape produced more university qualifying passes in relation to the number of pupils sitting these examinations compared to any other province.

Minister Angie Motshekga announced that the results verification showed that the provinces performed as follows;

A further analysis of the results also revealed that even though Gauteng province produced the highest number of those who managed university passes, that is, 36 843, these were lower when expressed as a percentage of all the passes compared to what was obtained by the Western Cape province who managed to send just less than half of those who passed to university. Another feather in the cap of the Western Cape Education Department is the one expressed by its MEC for education, Debbie Schäfer when she said, ” We have kept 63% of our pupils in school from the beginning of their schooling until matric.” This means that the Western Cape government has lost only just over a third of their pupils from the beginning of their schooling career until matric. These could be due to dropouts for many reasons. This is apparently the lowest drop out rate in the country.

Also expressing his view on the results, Paul Colditz, CEO of the Federation of Governing Bodies of SA Schools, placed the responsibility of the drop in the results to the drop in the performance of KwaZulu-Natal. He urged the province to clean up its act if it wanted to avoid the stigma of being labelled as a non-functional province, much like the Eastern Cape and Limpopo. He, however, also conceded the fact that the roll out of the new curriculum could also have had a causative effect on the results slump. Another cause of the drop in the results this time around was highlighted by the University of the Free State vice-chancellor Jonathan Jansen, who expressed concern that this was due to the education department policy of promoting failed Grade 11 students to matric. However, Minister Angie Motshekga disputed this, arguing that some of the pupils who had been promoted despite failing Grade 11 had gone on to pass their matric with a few even attaining university passes.

Turning to the concern of alleged cheating by some centres in the two provinces of Eastern Cape and KwaZulu-Natal, Minister Motshekga allayed the nation’s fears by saying that the problem was not as big as it seemed at the beginning of the revelations. She said, of the 58 centres that had been identified, 14 had been cleared of any wrong doing while the rest were still under investigation. She expressed the hope that the investigations would be completed timeously so that those pupils that are found to not have been involved in the cheating are allowed to get on with their lives. In response to the cheating allegations, the SA Democratic Teachers’ Union general secretary Mugwena Maluleke placed the blame squarely on the back of the system itself, which he referred to as being based on quantity instead of quality, which he said placed a lot of undue pressure on the teachers. He however said that this did not mean that the culprits should not be brought to book.