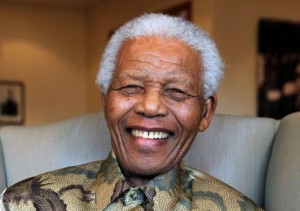 South Africans and the rest of the world are still in shock after the passing of one of the most loved politicians, former President Nelson Mandela. He passed away peacefully in his home surrounded by his family. Social media networks overflowed with anecdotes about the beloved statesman and messages of condolences to his family and the country at large.

And at last, media houses were able to unleash the documentaries they had shelved for months after Nelson Mandela was admitted in hospital and speculation about his health ran wild. By morning light, journalists from all over the world had descended on the sites of relevance to the first democratically elected president of South Africa and the struggle against the apartheid government. Presidents, prime ministers, religious leaders and celebrities read speeches some believe had been written and kept for this day.

South Africans sang and prayed outside his homes, the Union Buildings, town squares around the country and anywhere they could gather and pay tribute to the man known as ‘Tata’. British Prime Minister David Cameron and President Barack Obama who visited South Africa this year were among the first to honour the memory of Nelson Mandela. African leaders including the Somalian President acknowledged that Mandela’s passing was a great loss for the entire continent.

Nelson Mandela had been critically ill at his Houghton, Johannesburg home for some time before he passed away. Even before his death, there had been several notable media blunders including one where a television station ran a story about his death while the man was still very much alive.

SABC television channels aired shows about the life and times of Nelson Mandela. ETV dedicated most of the day’s programmes to him and interviewed a host of people who had interacted with the late president and shared his life. Religious leaders led prayers around the world. South African embassies the world over received crowds of people who came to deliver cards, flowers and messages of support for the Mandela family and remembrance of the man whose compassion touched millions.

Mandela will be buried at his home in Qunu, Eastern Cape. Madiba’s passion for sport was obvious and it infected the entire country. It is fitting that he will be remembered in a public memorial service on Tuesday, 10 December 2013. Two days before that, the nation will pray during the National Day of Prayer. From 11 to 13 December, the body of Nelson Mandela will lie in state at the Union Buildings. His state funeral will be held on Sunday, 15 December. Until then, the South African flag will fly at half-mast as the nation mourns its loss.