Mixed Reactions as Molefe Throws in the towel. 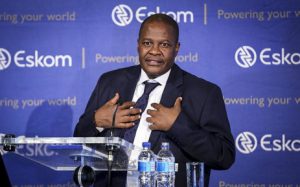 Eskom CEO, Brian Molefe as he addresses the press conference where he announced his decision.. Photo : EWN

The spokesperson for the National Union of Mineworkers (NUM), Livhuwani Mammburu says, “We have noted with serious concern the untimely resignation of Eskom CEO Brian Molefe. There’s no doubt that Eskom was starting to stabilise the power supply in the country under his leadership.” In support of this notion, the current and new Public Protector, Busisiwe Mkhwebane, said the resignation of the Eskom CEO was a huge loss to the South African community in general adding that she hoped that Molefe would serve in other structures, onstensibly of the government. She however hastened to caution that people should not rush to accuse those implicated in the state of capture report before they had gone through the proper judiciary process.

On the contrary, there were other members of the political arena who were not so kind towards the good CEO and implied that his resignation had not come soon enough. Speaking immediately after the resignation was announced, the speaker of the opposition, Democratic Alliance, announced that her party would be laying charges against Molefe. The party’s Natasha Mazzone said, “The DA will be laying charges in accordance with the Public Finance Management Act, as well as the Prevention and Combatting of Corruption Act, against Brain Molefe following the findings of the Public Protector’s State of Capture Report.”

Adding to the complexity of the situation, the spokesperson of the radical Economic Freedom Fighters, Mbuyiseni Ndlozi had this to say about Molefe. “We welcome the resignation as a step forward in ridding the state of the Gupta deployees and the type of criminal, kleptocratic behaviour that has been engaged in; in particular, in parastatals.”

On the other hand, Molefe has said that he would be seeking legal advertised on what course of action he would need to take in order to deal with the situation he finds himself in.