One Injured as Police Foil Armed Robbers in Bryanston 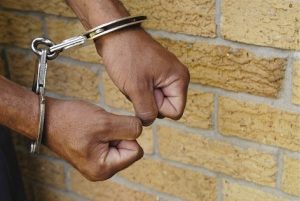 Police managed to stop a robbery and arrest in Bryanston.
Image: The New Age

As unemployment rises and life gets tougher for those without a job, there is a proportional increase in crime activities particularly in metropolitan areas like Johannesburg and Cape Town. On Tuesday, the fast acting and quick thinking of some members of the Johannesburg South African Police resulted in the foiling of a robbery of some houses in the posh Johannesburg suburb of Bryanston.

It all started when the alert police officers who were patrolling the area noticed a vehicle that was acting in a suspicious manner and tried to approach it to investigate. As they approached it, the robbers that were inside the vehicle started opening fire which was directed at the approaching police details. On realizing that they were under attack, the police returned fire. Tables quickly turned as the attackers became the attacked. In returning the fire of the suspects, the police, because of their more expert and accurate fire, injured one of the suspects on the spot.

The suspects are then reported to have started driving off in an attempt to flee the wrath of the police. However, in their hasty attempt to exit the scene of the crime, they resulted in an accident. The accident happened at the corner of Kelvin and Summit roads. The accident resulted, in turn, in the injury of two members of the public. This also led to the arrest of two members of the gang. The other two members of the gang of robbers managed to escape from the scene and from arrest. In order to make good their escape, the two suspects hijacked a passerby’s car and sped off leaving their two accomplices to face the wrath of the South African Police Services.

There has been a spike in the number of all kinds of robberies particularly in Johannesburg in the last few months. Recently, the Bedford Centre was stormed by robbers causing a huge panick in members of the public as the police and the suspects exchanged fire leading to injury on both sides. In another incident, a gun-totting man was caught on CCTV footage as he stormed a Shell garage. Last year, the country was gripped by nationwide armed robberies of cellphone shops.