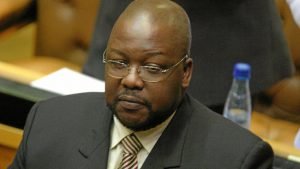 Police Minister, Nathi Nhleko says Zuma does not have to pay anything back to the State. Image: Mail & Guardian.

Following the presentation of the report by the Minister of Police, Nathi Nhleko, in which he cleared the President of South Africa of any wrongdoing and of not having misused public funds during the security upgrades to his Nkandla home, opposition political parties have cried foul and labeled the report as an insult to the South African people. Responding to the report, which was presented on Thursday, a number of political parties lambasted the presidency for allowing the ‘theft of government funds’.

The fiasco started when the ministries that form what is referred to as the security cluster recommended that there be security upgrades to President Zuma’s Nkandla home. During the upgrades, it emerged that there were several items that were built that could not be classified as security items. These include a swimming pool, fowl run and a cattle kraal. After the underhanded additions were brought to light by the media, the Public Protector’s office immediately embarked on an investigation which found that, indeed the president had benefitted ‘unduly’ from the upgrades and further recommended that the President repay part of the R246 million that was spent during the upgrades. At the time the President’s response was that he would not pay back the money until a report by the Minister of Police concluded its investigations and recommended that he pay back a stipulated amount.

When the Minister of Police, Nathi Nhleko found that the President was not liable to paying anything back to the public purse, this angered the opposition parties. The official opposition, the Democratic Alliance, through its newly elected leader, Mmusi Maimane said, “The DA will not allow the President to get away with the theft of public funds.” However, he added, his party had handed the matter over to their legal department and added that they would also await the terms of reference of the ad hoc committee that had been set up to consider Nhleko’s report. The other opposition, the Economic Freedom Fighters (EFF) said that they would go ahead with its quest to apply pressure on Zuma to pay back the money. The EFF has had several run ins with the President in Parliament as they have chanted ‘pay back the money’ in parliament culminating in them being manhandled and thrown out of parliament during the State of the Nation Address. “Even if it means that EFF must take a position that we must go to court we can do that because we want justice to be done on this matter. We are not going to rest until Zuma pays back some portion of the money on Nkandla,” they said.

The ruling party, however, welcomed the report of the minister of police. The ANC Chief Whip, Mr Stone Sizani described the report as elaborate and more detailed than Madonsela’s one. “The report (by Nhleko) further conclusively proves that features such as the pool, visitors’ centre and amphitheatre were not erected at the president’s private residence, but in the outer perimeter fence nearby president’s residence,” he said in response to questions from the media. He described the items of contention, the pool, the amphitheater, the chicken run, the visitor’s centre as well as the cattle kraal as not amounting to any direct undue benefit to President Zuma and his family, adding that the research and report had been conducted by experts who came highly regarded and independent.