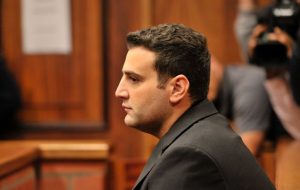 Christopher Panayiotou in court for the murder of his wife Jayde.
Pic: TimesLive.

During the hearing police investigator, Kanna Swanepoel, revealed that Panayiotou had made two unsuccessful attempts on his wife Jayde Panayiotou’s life before she was finally kidnapped, robbed and murdered.

The State also read out Officer Swanepoel’s report which states that Panayiotou hired two men to kill his wife and paid them R70,000 for the organised hit. He went on to say that Christopher’s father was not happy about the extra-marital affair he was having with Chanelle Coutts, who is his employee and a manager at the OK grocery store in the suburb of Algoa park, Port Elizabeth. If the defendant continued the affair he would run the risk of losing his inheritance.

Marius Stander, the State Prosecutor in the case told the court that Panayiotou put out a hit on 29-year-old Jayde as he considered her a financial burden.

Officer Swanepoel’s affidavit went into further detail about the fateful day Jayde was kidnapped and murdered. He states that she was assaulted and clubbed over the head before she was shoved in the boot of the attacker’s car. Money was then withdrawn from her account, thereafter she was shot three times at close range. Two times in her back and once in the head.

Thando Siyoli, a bouncer, who worked for Christopher Panayiotou at his club Infiniti, has turned state witness, saying that he was paid R30,000 by Panayiotou to kill Jayde.

30-year-old Sizwezakhe Vumazonke, a third suspect in Jayde’s murder, has admitted that he was paid R40,000 by Panayiotou for the hit.

State Prosecutor, Marius Stander says the state is against Panayiotou getting bail as he is a flight risk due his recent procurement of a Cypriot visa, which the State says he would use to abscond the country and evade arrest.

The trial has been postponed and will continue in the Port Elizabeth Magistrate’s Court on Tuesday the 26th of May.