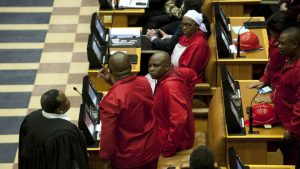 EFF MPs in parliament. Their suspension has been lifted by a ruling by Judge Dennis Davis.
Image: Mail & Guardian.

Parliament has announced that it will respect the judgement made in the Western Cape High Court which sought to set aside the suspension of some members of the Economic Freedom Fighters from parliament following the ruling of the Powers and Privileges Committee that the members be suspended from the house following their behavior in the house on 21 August, 2014.

Trouble started when on the August day, the EFF MPs decided to disrupt President Jacob Zuma’s question and answer session by banging on tables and shouting ‘pay back the money’. This led to the disruption of the whole parliamentary process for the day which was then followed by a protracted legal process in the House. The whole furore culminated in the suspension of the twenty EFF MPs who were involved in the disruptions. The Powers and Privilledges Committee suspended six MPs without pay for thirty days, another six were suspended for two weeks without pay while the rest were ordered to apologise to the House and fined fourteen days’ salary.

In his judgement, High Court Judge Dennis Davis adjudged that the suspensions be set aside. He said that suspending them without pay was not only an affront to the MPs themselves alone but also on their ability to fulfill their mandate as representatives of at least 6,35% of the electorate. He added that barring them from their offices was tantamount to stopping them from performing their duties as peoples’ representatives. He, however hastened to add that his judgement was not to be interpreted as making a judgement of the MPs’ conduct on the day in question.

In response to the judgement, Parliament said that it would respect the decision of the court. The parliamentary spokesman brought the attention of the public onto the fact that the Judge had stated non categorically that he was not attempting to undermine the authority of parliament and consequently reiterated that they were of the opinion that the process that had led to the suspension of the EFF MPs was fair, transparent, open and would stand any legal scrutiny.