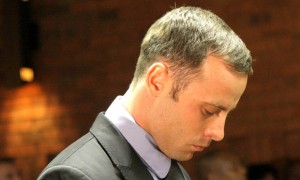 The trial of Oscar Pistorius is scheduled for 3-20 March 2014. – image – www.theguardian.com

Oscar Pistorius kept his date with the magistrate at Courtroom C of the Pretoria Magistrate’s Court on Monday. Pistorius was greeted by the relentless clicking of media cameras and the usual commotion which surrounds a court appearance during a high-profile case. Few cases in South Africa have generated as much public interest as the Oscar Pistorius murder case.

Pistorius, a world-famous paralympian and his girlfriend Reeva Steenkamp made an attractive couple. Reeva studied law, was a model and had appeared in a well-known South African television reality show. Pistorius shot and killed Reeva Steenkamp at his Pretoria home on Valentine’s Day. He insists that he thought he was defending himself against a burglar when he shot through the bathroom door. Unfortunately, the sounds coming from the bathroom were made by Reeva Steenkamp and not a burglar.

The state is charging Pistorius with premeditated murder as well as the contravention of the Firearms Control Act. Pistorius is concerned that the state will try to depict him as a ‘trigger-happy’ individual based on its investigation of two previous incidents. Pistorius has discharged firearms in a friend’s vehicle and at a Johannesburg restaurant.

The Pistorius trial will take place from 3 to 20 March 2014. According to media reports, the state will call at least 100 witnesses to prove that Pistorius intended to kill his girlfriend. There are witnesses who will testify that there was an argument in the Pistorius home shortly before the shooting while others will talk about the athlete’s character. In preparing to defend Pistorius, the defense team indicated that it will also be calling its own large band of witnesses. Magistrate Desmond Nair said that the bail conditions which were imposed on the athlete would remain unchanged.

In an ironic twist, Monday 19 August would have been the day that Reeva Steenkamp turns 30 years old. Her family preferred to stay home in Port Elizabeth and celebrate her birthday. Her uncle, Mike Steenkamp spoke on behalf of the family. He said: “We will be doing something casual, baking a cake for her, being together as a family. We certainly won’t be watching the trial. We will be thinking about her.”

Pistorius has one more thing to worry about; the sale of his Pretoria home. The luxury home is within the security estate of Silver Woods. ENCA reported that estate agents are having a hard time finding a buyer for the house where beautiful Reeva Steenkamp died. One agent exclaimed: “I wouldn’t want to market that house. It just has bad karma attached to it now and it will be an incredibly difficult sell.” The estate agency with which the house is listed is Engel and Volkers Silverlakes. It is listed for R 6 million. It remains to be seen if the house will be sold by time the trial of Oscar Pistorius begins in March next year.