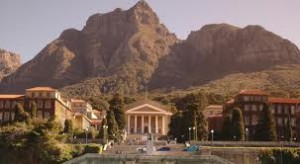 The image of world-renowned Africa’s number one university, the University of Cape Town (UCT), has been tarnished by a ‘racist article’ that was published on Tuesday by the university’s weekly student newspaper known as Varsity.

The article, titled “Is Love Colour Blind?”, reported that white people are the most attractive race, according to a poll that was conducted at UCT. It reported that out of 60 students, 10 from each racial group, 38% thought that white people were the most attractive race while only 8% thought blacks were attractive. The other races: coloureds, indians, asians and ‘mixed race’ received 19%, 14%, 11% and 10% respectively.

These results have sparked a huge race row across social networks. From the comments on Twitter, it is clear that many people view the results of this poll as the opinion of the university as a whole. Some even indicate that racism is present at UCT and the city of Cape Town.

The following Twitter  users voiced their opinions about this poll:
TheLegend ( @_TheRealLES_): “UCT and its racist tendencies, the ANC must do something about it”. Tumi (@EezyD_Swagg) replied, “TRUE”.

@NjabuloCB: So much for “the best uni in SA” RT Spar_Letta: UCT is bored and racist.

WORD SOULJAHS ‏(@JacquiThePoet 23h): UCT is racist. We know this. Akere it’s part of CT… Why are we shocked + surprised & angered

However, there are some people who were not bothered by the results of the attractiveness poll. Frans Cronje, deputy CEO of the South African Institute of Race Relations saw nothing wrong with it. He said, “This isn’t a spoof survey, it is actually a useful insight into a real issue. If they didn’t print it, it would have the implication that black people aren’t mature enough to deal with these results – which is even more offensive.” A Twitter user called yokugcina (‏@ZaMoney_ 8h) said, “I agree with @FCronje_SAIRR the opinion of 60 idiots at UCT cnt be called racist Its their freakn opinion n i wudnt b bothered”.

In the minds of individuals who were provoked by this poll, a group of biased white UCT racists conducted this poll in order to belittle black people. However, this is far from the truth. A black student, Qamran Tabo, conducted this poll and reported the results. It is unlikely that she intended to belittle her own race. Also, it may be unfair to see the poll as indicative of the university’s “racist tendencies”. Members of the UCT community were angered by this article, showing that it was not the institution’s collective opinion.

Varsity’s editor-in-chief Alexandra Nagel apologized for using an inappropriate title. She said: “I formally retract the title of the pie chart ‘UCT votes on the most attractive race’ as this was not a formal survey conducted by the university”. However, when she apologized, the damaged had already been done. People continued to express their anger on Twitter and other social networks.