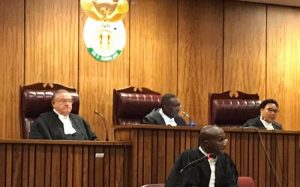 The Gauteng High Court in Pretoria. Judgement said Ramaphosa was right in revoking appointments as they were not final. Image: EWN.

The Gauteng High Court in Pretoria on Wednesday handed down a judgement in which it ruled that former president, Jacob Zuma, erred in his appointment of senior advocates to head the prosecutions of various provinces. Judge D.S. Fourie said that Zuma did not make public the appointment of the advocates to the National Prosecuting Authority (NPA), which formed an integral part of the appointment process.

Judge Fourie was responding to a case that was brought by two of the appointees made by Jacob Zuma before he was recalled from office. Advocates Ron Simphiwe Mncwabe, who had been appointed as the director of public prosecutions in the Northern Cape division of the High Court and Khulekani Raymond Mathenjwa, who had been made director of public prosecutions in Mpumalanga, were challenging the reversal of their appointments by President Ramaphosa when he came into power. They wanted the President’s decision reviewed and set aside.

In arriving at its decision, the court explored whether Ramaphosa was within his rights in revoking a decision that had already been made by another president. On that, the court found that he could not have done that. In part of the judgement, the judge found that the minutes of the meetings in which Zuma made the appointments were valid documents. However, the Judge argued that these appointments were not daily occurrences and should not be done behind closed doors. He added that the dissemination of such information into the public domain was implicit in the constitutional ordering so that the public may know who to hold accountable. By not making the public announcement himself or by delegating for instance, to the then head of NPA, Shaun Abrahams, the appointments could not be deemed final and therefore irrevocable. Hence Ramaphosa was within his rights not to finalise the decision and revoke them.

The appeal by the two advocates was dismissed with costs. A few weeks before he was recalled by the ANC, Jacob Zuma appointed a total of five advocates to the NPA as follows: Mncwabe, Mathenjwa, Malini Govender as Free State DPP, Dr Jacobus Pretorius and Bonnie Currie-Gamwo as special DPPs for the priority crimes litigation unit and the sexual offences and community affairs unit, respectively. Apart from Mathenjwa and Mncwabe, Pretorius had also challenged Ramaphosa’s revocation but later withdrew. The other two, whose appointments were also revoked, did not challenge the President.