The Support for Malema’s New Political Party Could Surprise Many 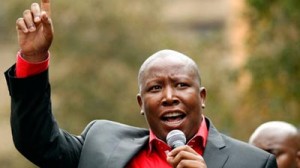 Many South Africans believe that Malema is not in a position to be starting a new political party due to various reasons e.g. the reasons that led to his expulsion from the ANCYL and the legal and financial challenges he is currently facing. However, Malema seems to be unfazed by all of this. If he does successfully launch EFF, its support could surprise many.

South Africans are very forgiving or tolerant of the mistakes that politicians make. They tend to focus on the future more than the past. It is well-known that Zuma has made several mistakes in the past. However, millions of people continue to support him. In fact, his support peaked while he was attending court cases, facing a number of charges. Now the memories of his mistakes are gradually fading away in the minds of many South Africans. The same thing might happen with Malema.

Malema is currently facing a number of charges. He and some of his fans strongly believe that some of the charges he is facing are part of a political conspiracy to silence him. This, including the negative comments and controversy surrounding his new party, could work in his favour. He might gain more support than expected. Also, there are people who may vote for him not because they really support him but just to give the ANC a wake up call.

Some members of the ANC have criticized Malema for starting a new political party. Fikile Mbalula said Malema is reckless and immature to start a new party. He said what Malema is doing is commiting political suicide. Ronald Lamola said Malema should have waited until he was rehabilitated and readmitted to the ANC. However, Malema believes that it is not only within the ANC where he can participate in the struggle for economic freedom.

Although many people disagree with many things Malema says, he has quite a huge following. Every time he talks, he gets a lot of attention from the media. He didn’t even have to pay anything to advertise his new political party. He only announced it last week, yet millions of South Africans already know about it. Clearly, through his loud mouth, he has managed to make his name a well-known brand, and that can help him to garner thousands or millions of votes if his party will be contesting the elections next year. According to The Eyewitness, Malema will announce in July whether EFF will be contesting.