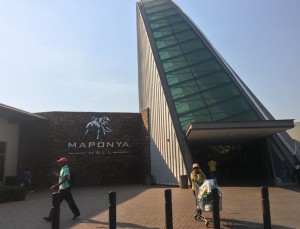 Maponya Mall, where one of the robberies occurred. Image: ENCA.

In the latest two incidents of robbery in a spate of more than six shopping mall robberies, one person was killed and the perpetrators made away with a large undisclosed amount of money. These two robberies, like the others before them, happened in the metropolitan province of Gauteng on Friday and Saturday.

One incident happened in a Sumsung Store at the Craddlestone Shopping Mall on Friday afternoon. According to the store owner, the whole incident did not take more than a few minutes just as in the movies. He relates that the group of seven gunmen burst into the shop and threatened the shop workers as well as the customers that were there. They then proceeded to lock everybody up in a back room in the shop. The thieves then broke into the store cabinet where they looted tablets, phones and other electronic gadgets and made their way out.

In another, more violent incident, one person was killed and several others were injured when robbers made away with an undisclosed amount of cash in a daring cash-in-transit heist on Saturday. The incident, which was caught on CCTV and was screened on public television showed how the thieves intercepted the security guard who was carrying the cash box and shot him at the back of the head at point blank range. Another security guard was also shot but he was wounded together with three members of the public who were around. The police spokesperson did not, however, reveal the extent of the injuries.

This marks the latest in a spate of Shopping Mall robberies that have hit Gauteng in the last month or two months. In most of these robberies, the stores involved were mostly those that sell cellphones, tablets, iPads and other resources. Cresta, Centurion, Northgate and Maponya in Soweto have been targeted by these gangs.