Dr Grace Mugabe Reveals She Wants to be President 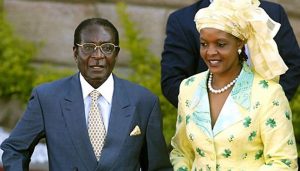 After months of speculation about Dr Grace Mugabe’s ambitions since her sudden and dramatic entry into Zimbabwean politics, she has finally revealed her interest to become the country’s president. Grace Mugabe is the wife of the country’s incumbent president, 90 year old Robert Mugabe.

From a philanthropic, supportive and quiet First Lady who has stood by her husband through his long tenure as president of the Southern African nation, through the sanctions that were placed on him and some members of his ruling party as well as through his reportedly ailing health, Dr Mugabe was suddenly uplifted into the political fray when her name was proposed and seconded to head the Women’s Wing of ZANU PF. The announcement was made some months ago at her Mazowe farm where she runs a children’s charity as well as a dairy business. The new position ensures that she automatically becomes a member of the ruling party’s politburo, a powerful decision making body of the ruling party.

Since then, everything about the First Lady of Zimbabwe has been on fast forward. A month ago she graduated from the country’s oldest and most prestigious university with a PhD in Sociology which has raised a lot of controversy because the degree was apparently conferred on her barely two months after she had enrolled for study. She has also been on a whirl-wind tour of the nation in what has been dubbed the “Meet-The-People Tour” where she has made many a controversial statement and has been relentless in her attack on Joice Mujuru, her husband’s deputy. She has accused her of corruption and also of leading a faction that wishes to topple her husband from his thirty-four year reign.

While she has been conspicuous by her silence in the face of these treasonous allegations, Joice Mujuru, in a Facebook profile which has been attributed to her suddenly erupted in thinly veiled retaliation to the accusations. According to reports, Mujuru refuted claims that she had turned her back on her 90 year old leader and referred to Grace as a blabber mouth. The publication also claimed that Mujuru also referred to Grace as a mad person who has picked up a whistle in the statement “Kana benzi rikabata pito…,” which generally means when a deranged person is in charge.

On the 23rd of October, Grace is said to have made the statement, “People say I want to be president, why not? Am I not a Zimbabwean?” when addressing veterans of the country’s liberation struggle in Mazowe about 40 kilometres north of Harare. This is the first time that she has made a direct admission of her ambitions to become the leader of the country. In the past she had only gone as far as making pregnant statements which have only been interpreted to mean that her intentions were much more than just heading the Women’s League.

Political commentators have come out in hordes, with most of them warning about this path that Dr Mugabe was taking. Simba Makoni, an opposition leader and former finance minister in Mugabe’s government has criticized Grace for what he called straying into the territory of State President. On the other hand, another opposition leader, Lovemore Madhuku, has warned that Grace Mugabe was taking a risk of being assassinated by members of the ruling ZANU PF if she took over from her husband as state president.