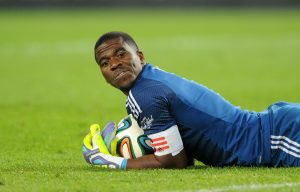 It has emerged that the slain soccer star who was also the goalkeeper of the South African National team, Bafana Bafana, Senzo Meyiwa was the victim of a hit. According to some media houses who were quoting Senzo’s father, Samuel, his son was a victim of a hit that was carried out by two well known gunmen.

Senzo, who was also the captain of Soweto soccer giants, Orlando Pirates, was shot and killed in October 2014 at his girlfriend, Kelly Khumalo’s family house in Vosloorus. At the time of his death, working from an identikit, the police rounded up and arrested no less than thirteen men whom they questioned and finally released for lack of evidence. One of the men they detained for questioning, whose identity was widely publicized and whom they eventually released, announced recently that he was suing the police for millions of rands for wrongful arrest. Zanokuhle Mbatha reportedly said he was taking the police ministry to the cleaners so he would be compensated for the wrongful arrest that was carried out on him.

There have been conflicting reports in the media about whether the police were making any progress in their bid to find who killed the soccer icon. According to some sections of the media, an official of Orlando Pirates, the club for which Senzo was playing when he met his untimely death, said that the police were not making any progress at all in their quest to find the soccer star’s killers. The police, on the other hand, are saying they will be making an arrest shortly. Senzo’s girlfriend, Kelly said she hoped that the police would catch the perpetrators soon because she believed they may be following her. According to the media, the police had told Meyiwa’s family that they were on the verge of making an arrest. It was added that the police believed that the killers were paid to kill the soccer star.