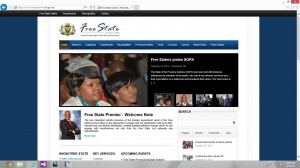 A screen shot of the Free State website. – image – www.freestateonline.fs.gov.za

Owner of a successful web design and development company Jam Factory, Etienne Bruwer,  says that banks and other financial institutions spend many millions on web development because they must be able to guarantee a high level of security to their clients. These institutions hold personal and financial information belonging to individual, corporate and international clients. Unauthorised access to this sensitive data could be catastrophic and therefore it makes sense that one such institution reportedly spent R12 million on their website. Having said that, no one seems able to explain exactly why the Free State province saw it necessary to spend R140 million on its website.

The Free State has been in the news for all the wrong reasons in the past few months and corruption ranks high on the spotlight on the Free State. Last year the Daily Maverick told of how worker’s union COSATU had intentions to do a large-scale investigation into the ‘blatant corruption’ in the province. Julius Malema is a prominent figure who has been alleged to have very strong fraudulent  business ties with the Free State.

Elzabe Rockman, the director general in the Free State, accepted a proposal that led to a three-year contract that would see to revamping the entire website for the province. She insists that the R140 million figure is highly inflated and that the budget for the website was much less at R40 million.

The Mail and Guardian disclosed that there were other, equally capable companies that submitted tender bids that were much lower. These companies were overlooked and the province favoured the higher bid.

Etienne Bruwer described the amount charged for this web development assignment as “ridiculous”. He went on to say that the company that was eventually selected is comfortably “making R3.5 million profit a month”. Tumi Ntsele, the businessman to whom this project was awarded, is certain that the concern of opposition parties over this matter is fuelled by the fact that opposition parties have a racist agenda. He believes that his fee is fair for the work that is required of him.